‘ArtIsts’ we are (the I being the ego), dottIness extremus, the InfinIte I.  And few artists exemplify this better than the pre-Yoko Ono, single Japanese female, Yayoi Kusama – so conceptual she sacrificed her sanity for us. 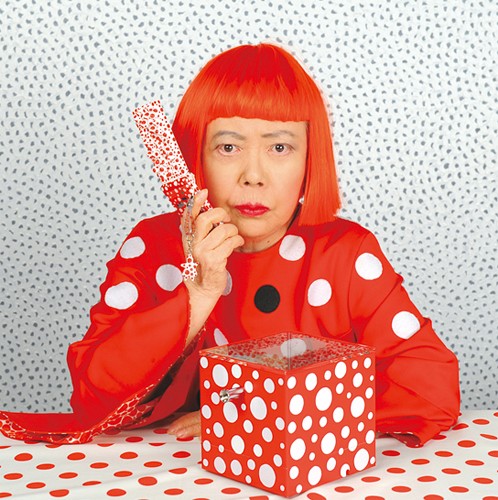 The current retrospective at the Tate Modern in London – sponsored by Louis Vuitton – is curated as a human story. 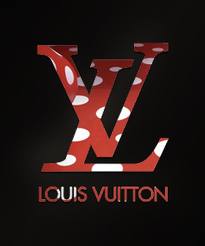 The first room – the micro-struggling illustrations of a young girl in a world where death lies at the end of the phallus-twisted tunnel. 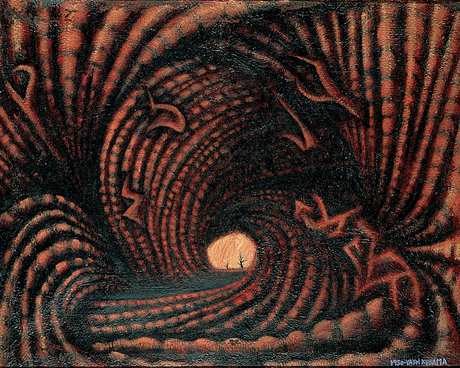 [Yayoi Kusama, Accumulation of Corpses (Prisoner Surrounded by the Curtain of Depersonalization) 1950]

The second room – making it big in America – with obsessive, fish-scale canvases – 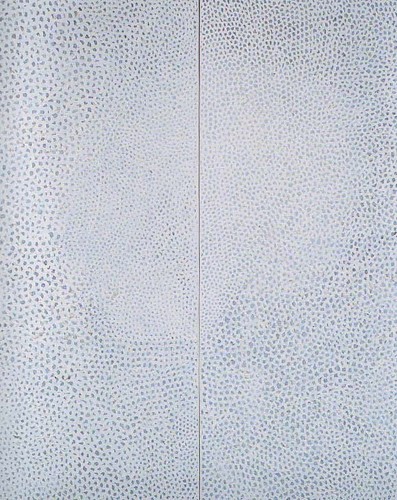 …which remind me of the beautiful off-white, suede Louboutin for Giles boots I was lucky enough to borrow for a shoot… 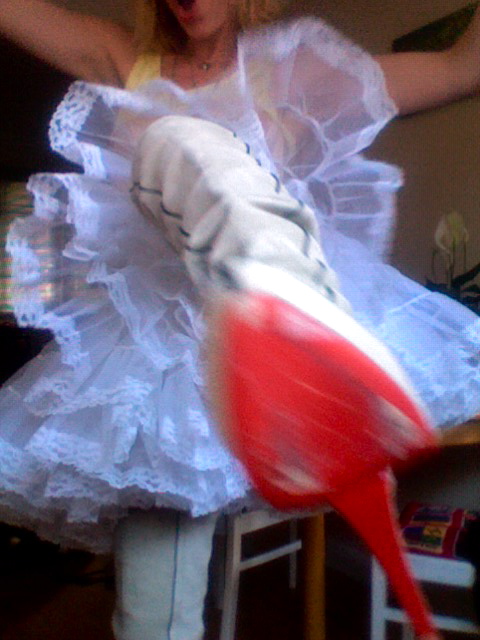 She sells well, netting success with her ‘mind-net’ pictures but wants to escape the confines of her work – only way out is on a boat – and it’s filled with cocks, wriggling to get inside her… 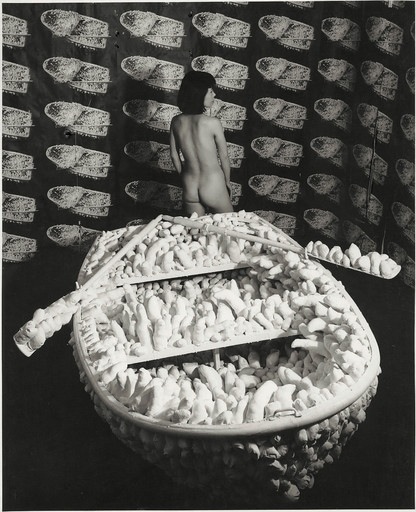 The exhibition then goes pop!  She makes a film about herself, a pretty geisha vs the entire ugliness of an industrialised city. 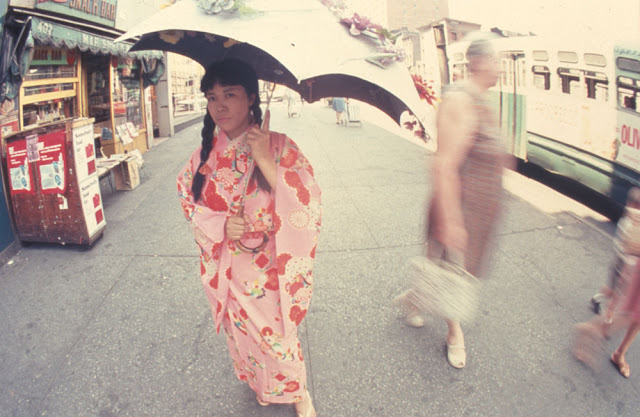 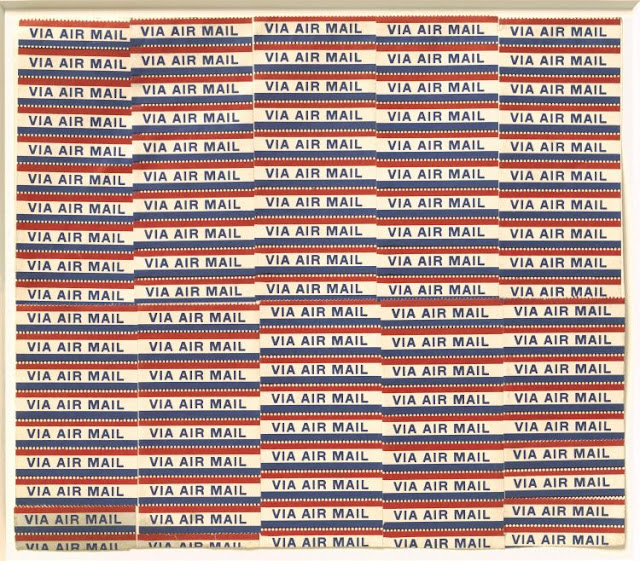 The next rooms get preeeeeetty psychedelic.  Learning from pop-meisters, and being in contact with Georgia O’Keefe, who possibly advises on lifetime themes, dots start to appear in Yayoi’s work.  She brands herself with the burning stamp of dottiness – polka polka polka dotty dotty dotty.  And she looks good on a horse. 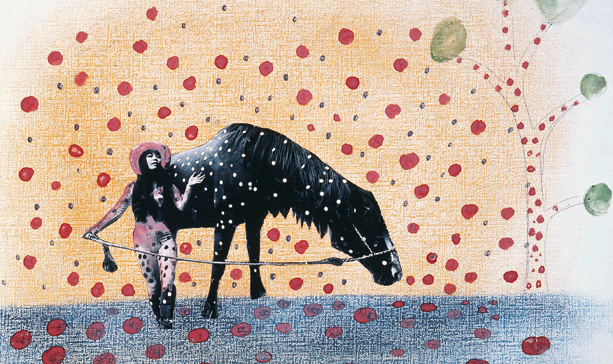 Opening a concession in Bloomingdales’ selling dresses made of transparent PVC and flowered-up suitcases- it’s a period so fabulously of its era, 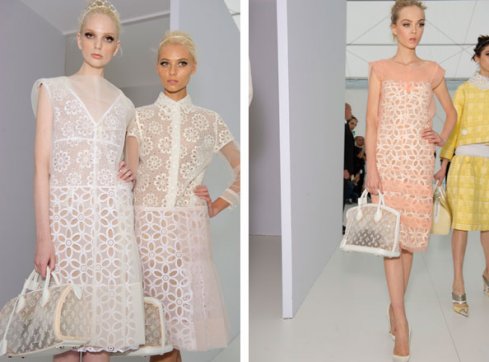 [The future vision of Louis Vuitton and Kusama is destined to be dotty…where Murakami added colour and cutes-i-ness, Kusama will add strong-woman circles, in yellow on black and white on red.]

The naked venus of her own parties.  Putting the I into Artist – I mean, would we bother otherwise?

But after all the parties, the result – it’s too poetic for words, because, after a hallway of amazing collages, she sections herself, works in a hospital studio, art therapy, and the phalli are back, leaping out of boxes, like bad thoughts from a spaghetti-ed brain. 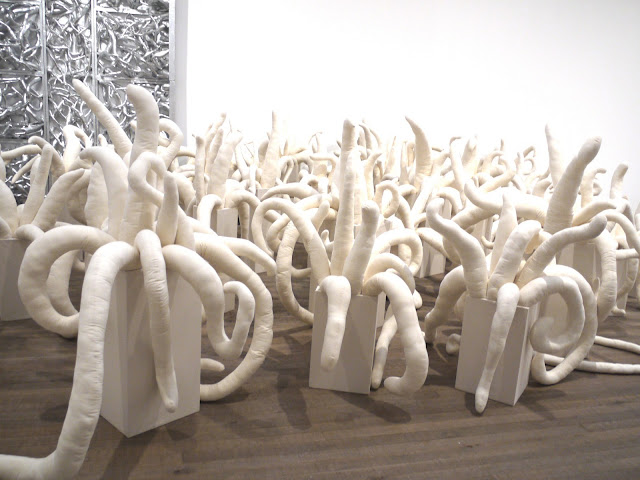 I nearly cried at the burned-outness of the next pieces…which I cannot easily find pictures of, and to revisit it, I only have to flick through my mind.  No, you can’t come in.  I’m busy.

Too many microdots, all over the walls…and the snakey phalli… 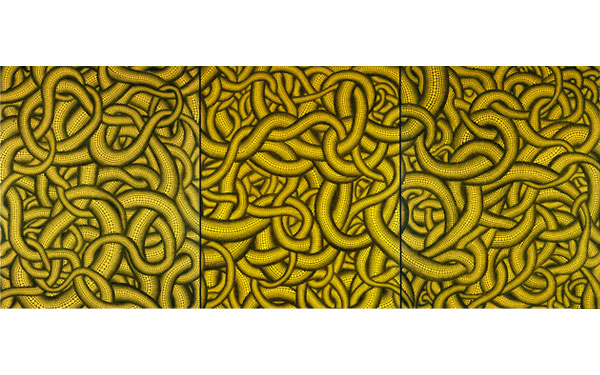 To a magic room, where we entered her installation house to ask – “Do you take dots? Drop more spots in your tea?” 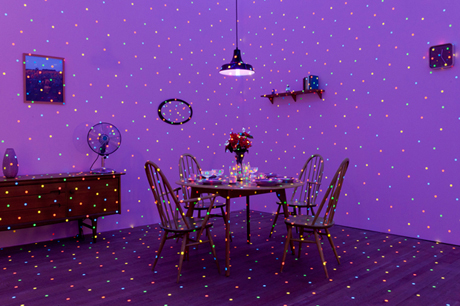 She’s still an inpatient, cooked for, paying for an organised life, looked after – she has a studio over the road – she must have paid for the whole hospital…art, we get sick if we don’t do it, sick if we do…the 82 year-old said this to the Guardian,  “I have done all the work myself, not assistants. That’s why I’m in a wheelchair. I’ve been doing it physically — it’s hard labour — throughout my life.”

(Many contemporary artists follow the lead of the Italians, and have studios of assistants making their art for them – commerce – greed – I,I,I,I,I,I,I,I,I want more art on my walls, now, do you hear?  Ok, Ego!)

If you’re prolific, you have to be looked after – Virginia Woolf would surely agree.  Kusama is the queen of her own disco – this exit piece, Infinity Mirror Room moves right on from the mirrored rooms at the Serpentine show in 2000. 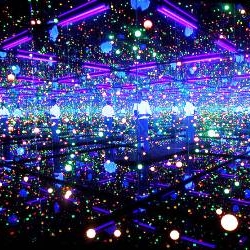 Try turning the screen brightness up and down, up and down and project this to your brain…with a dance remix of your own Garageband – it’s a 1993 co-lab with Peter Gabriel: 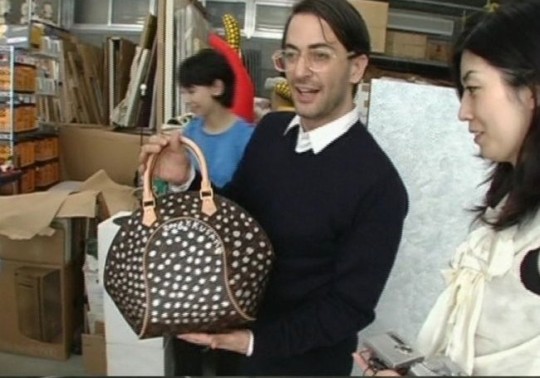 I saw naked pictures of Patti Smith recently  -not these ones unfortunately, although almost undoubtedly also taken by Robert Mapplethorpe – the others had more vulnerability… 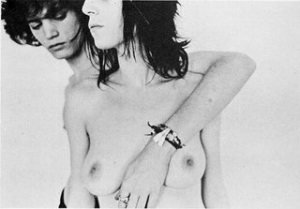 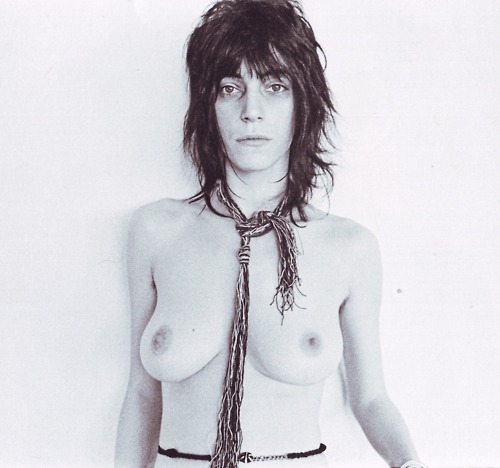 there are so many pictures of me knocking about, in dirty old filing cabinets in the wastelands of youth.  Who cares?  Do the most crazy ‘I-people’ get naked? 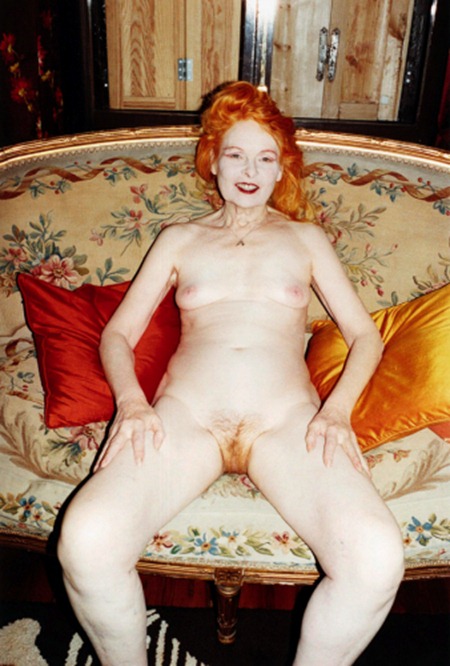 Is it a stand against drab normality?  The ancient Greeks would say so.  In Berlin recently, it was interesting to find out nudity was seen as an act of rebellion and freedom in the old Soviet DDR lockdown of the East Berlin ‘rescheming’ regime.

Fame and the quest of fame is seen as a contemporary sickness – a trap of our commercial and marketed times – but for Kusama, Patti Smith, most female icons of the last century and the twenty-first (beyond our dear Royals,  and those of a more Middle Eastern persuasion – who intelligently stand against idolisation, or have no power to use the politics of ‘shock and awe’) – stripping off and whoring ourselves is to rise above those that won’t – I wasn’t born with a fiefdom, life is so fast – we are who we lie next to.  Paris Hilton, we are indebted to your ‘I-matter’ legacy.  Or we die in the bland ocean of normality and conformity.  Extremes – nakedness is beautiful, it is vulnerable, it is who we are.  Nakedness is so brave.  So intimate.  So NOT fashion, but everything fashion is about.  As a true riot grrrrrrl – it is only flesh.

In an interview in Index about her Self-Obliteration/naked period, Kusama says it was a time when she hated herself.  However, she was more famous than Andy Warhol.

Her dresses helped take her there.  Particularly the ‘hole dresses’ where hooded ponchos are slashed to expose our breasts.

I was disappointed by the exhibition, to discover at the heart of the art was an ego – a crazy, I-sacrificing soul who would never have become so famous had she not been determined to make herself the star of the show.  The Serpentine did it better, that show was about the product of selfishness, THE ART, not the person that created it.  However, without I, there would be no ArtIst.

I Art, Therefore I Am…

Yayoi Kusama’s autobiography is out now…the octogenarian has also illustrated a fabulous, turn your kids into trip-heads, Alice’s Adventures In Wonderland… 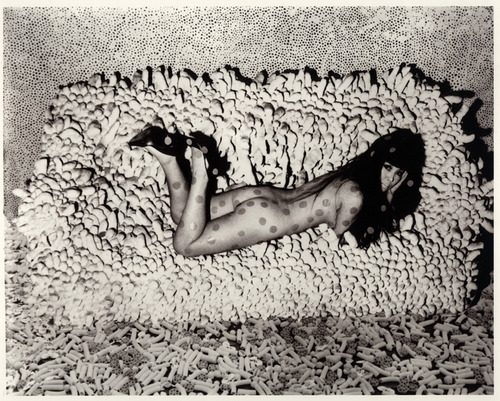 One thought on “I Art Therefore I Am ArtIst”