The night before the votes came in… 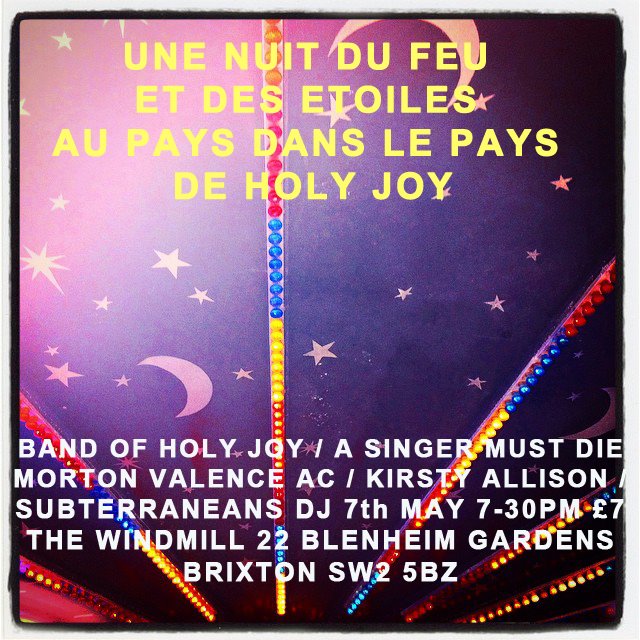 Was my pleasure to MC amid left-bank optimism in the wilds of Brixton.  Johny Brown – frontman of legendary folk-punk heroes, Band of Holy Joy invited the gorgeously French band over, A Singer Must Die

– so it all went pretty indie.

When doing my homework, I discovered how poetic translations can be – finding zillions of versions of Baudelaire, Rimbaud & Verlaine.  Being the kind of girl who has to order the first thing she sees on a menu, in fear of indecision, I went freestyle and opted to make my own really bad translations below…

My youth was nothing but a tempest storm

The thunder and the rain have ravaged me

And sickened fruit in my garden lays

Voila – touched by the autumn of my creative life

I prepare my shovel and pick

To reassemble the earth and soils

Arrêt – this water must not lick through cracks to tombs beneath

And who knows if the flowers that I dream

of finding in this sun will root or wash away, a tragedy,

Never finding the mystic thing which offers their vigorous beauty

and the obscure enemy locked to our heart is blood lost,

growing from this fortified dust…

In response to my enemy

Time is my enemy

I fight in bars

In praise of love

Before there was Burroughs, shooting his wife, Rimbaud shot Verlaine.

Give me a penny for your Rimbaud.

Must get out of bed

Get out of bed.

Time and space are the replacement of place

The holocaust is the spirit of displacement

Anarchy is rage not rave

Get out of bed

Get out of love

Our price is now

How does it feel to be mother of a thousand dead

No agitprop to Iraq half a million dead

There ain’t gonna be a revolution

We have to go sideways so we can’t be seen, he said

The true dimension will be like a prairie fire

Anarchists get out of bed.

We shall be moved

We must not bemoan the loss of dinosaurs

Or the concentration camp we live in now

As long as I can remain outside of it

And get out of bed

WE’VE GOT THE SYSTEM

Vote for the commodification of music
Vote disco

Vote The Band Of Holy Joy​

Vote for the future

Vote for the past

Stop being so shellfish

The sky is copper

Devoid of any light,

The moon had lived and died.

The sky is copper

Devoid of any light,

The moon had lived and died.

You gaunt wolves too,

How do you do?

a void of light

Hunted by gaunt smacked up wolves

Queens of the night

The warmth of dreams

Condemned Women  – BAUDELAIRE [didn’t read this, or translate it – lifted from the amazing http://fleursdumal.org]

They turn their eyes towards the horizon of the sea,

Their feet towards each other stretched, their hands entwined,

A few, with heart-confiding faith of old, imbued

Amid the darkling grove, where silver streamlets flow,

Unfold to each their loves of tender infanthood,

And carve the verdant stems of the vine-kissed portico.

And others like unto nuns with footsteps slow and grave,

Where long ago St. Anthony, like a surging wave,

The naked purpled breasts of his temptation saw.

And still some more, that ‘neath the shimmering masses

Among the silent chasm of some pagan caves,

To soothe their burning fevers unto thee they call

O Bacchus ! who all ancient wounds and sorrow laves.

And others again, whose necks in scapulars delight,

Who hide a whip beneath their garments secretly,

Commingling, in the sombre wood and lonesome night,

The foam of torments and of tears with ecstasy.

Most people get three chances – I got FIVE

Light over flatus, ignus, aqua, terra, and me

And everyday I fight nature

From Babylonia, to the path of Venus across the Wiccan sky

Israel where jesus drives a Fiat Lux (let there be light)

Changing from clown to pallbearer

choking on the rust of gargoyle’s lungs

RIMBAUD – RAMBO – the shooter, the midnight looter – rebel poet, walked out on words by 20,

Dying in Marseille – a leg less than he was born with.

But who cares? Poets live forever.